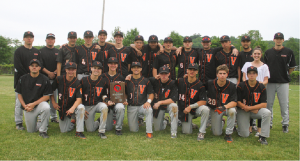 The 2014 Wildcat baseball team finished with an overall record of 15-11, and played in the Sectional Championship game. The Wildcats were the preseason pick to finish 9th out of 10 teams in the Big 8 Conference. The Wildcats surpassed outside expectations and finished 9-9 in a tie for fourth place in the Big 8. Sophomores Ben Rortvedt and Keaton Knueppel were named to the second team All Conference team. Seniors John Moynihan, Ryan Pynnonen, Troy Granick, and Mitch Flora were all named honorable mention All Big 8 Conference performers.